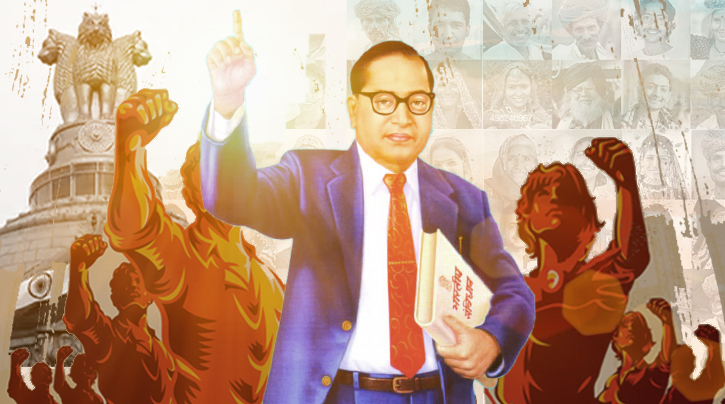 India’s most underappreciated gem. A political thinker, social reformer, economist, lawyer, constitutionalist, modernist, progressive, feminist, Leader of the masses, and a simple human being.  If you haven’t read Babasaheb, you are yet to discover India.

Today is the 130th birth anniversary of Babasaheb. He was born on 14th April 1891 in Mhow (near Indore). The more I read the text written by Babasaheb and understand his life, principles, and philosophy; I am convinced that he is the most exemplary thinker India has ever produced. You see, one can spend nights just talking about his contribution to the Indian Republic, but those contributions are outstanding not just because of their nature but also due to the context of time. When untouchability was practiced rampantly, there were no rights and dignity provisions, the modernist thinking of equality was yet to set in. A man from the community of untouchables goes on to become the architect of Indian modernism.  While independent India has reduced him to just the ‘constitution,’ he was much more.  Even today, the mainstream discourse, political leaders (mostly Savarna), and an average citizen address him as ‘architect of our constitution.’ While this is true and highly relevant, it is also important to note that the constitution came at a later stage of his life. There is a little discussion about his work during the early stage and mid-stage of his life. The list of his contributions is endless, and if one begins to go through his work in detail, it is beyond shock and surprise that how much this Leader is under-appreciated by Savarnas.

Babasaheb’s contribution to the social reform of India is beyond the ordinary. If one wants to learn about the caste system and casteism, they should begin by reading Castes in India: The Mechanism, Genesis and Development, followed by Annihilation of Caste. Many more texts like The Untouchables, Who were the Sudras, The rise and fall of Hindu Woman thoroughly unpack the caste phenomenon and issues with the Hindu religion. This is just his contribution in the area of Sociology. I will shortly conclude AOC and begin with what remains in the endless intellectual work he has left for us, from sociology to economics to nationalism to lawmaking.

Further from his unpacking of the caste and leading a socially progressive movement, Babasaheb’s contribution enters all life spheres.

He was a feminist and progressive. His progressive politics made orthodox like Gandhi and moderates like Nehru extremely uncomfortable.  He understood all forms of oppression, from caste to gender.  He talked about giving rights to Hindu women via the Hindu Code Bill, one of the first leaders to advocate maternity leave, worked for equal wages for men and women, equal sharing of property to women, rights of the first wife.

He was committed to the right to vote and universal franchise, he designed the water policy of India, he was a trained economist and his contribution goes as far as setting up RBI, reforming labor laws, prohibiting child labor, he mastered close to 60 subjects, had knowledge of over nine languages, the list is just endless. When he resigned from the Nehru cabinet in 1951 as a Law minister, he was equipped to take any portfolio, big or small. If only Nehru understood and appreciated his metal. One can spend a lifetime just reading his work.

If a thinker made such commitment and dedication to a nation in the western world, the west would ensure they teach him at all levels and spheres of life and set the person and his/her teachings in the masses’ consciousness. Most importantly, give him the respect he deserves.

Yet in India, he is reduced to tags like ‘Dalit Leader,’ ‘Leader of the depressed class’, ‘Architect of the constitution’ etc. He was so much more, he is the Father of modern India, and Indians would not enter the age of modernity without his work, commitment, and sacrifice. In fact, without him, we would be left to the orthodoxy of Brahmins. They would do everything to ensure their caste hegemony remains and enlightenment values like equality, liberty, fraternity are sidelined. Babasaheb was a force to reckon with at that time and is a force to reckon with even today.

Babasaheb’s work survived only by the consistent effort by generations of Dalit scholars and community activists who kept Babasaheb’s ideas alive and consistently fought every attempt to erase or appropriate his legacy. Only through these efforts that resisted undermining his work has made Babasaheb accessible to a whole generation of Savarnas now in 2021 as they struggle with their inevitable fascism that has come with Brahamnical political order.

Unfortunately, we Savarnas haven’t read him, and due to this, we do grave injustice to not just him but also our nation. First, we underestimate his contributions and don’t give him due credit, and second, we don’t understand complex concepts like caste. So when there is a discourse about Dalits’ struggles and lived experience, Savarnas are either shocked or in denial. Many go further and make offensive remarks like how the caste system is the most efficient in the world and while making constitutional provisions for marginalized communities, Savarnas uproar, with full passion.

Reading Babasaheb is critical for us, one it teaches us critical thinking and allows us to examine the dogmas we hold dear to our hearts. Second, it will enable us to reexamine our privilege and allow us to look at the world from another person’s viewpoint who doesn’t enjoy the same caste privilege. Lastly, it will only elevate our intellectual capabilities. Although I will not reduce Babasaheb to his caste contributions, for Savarnas, this is the most critical beginning point. Till the time we Savarnas don’t understand the complex phenomenon of caste, Indian progress will be at a standstill. If Savarnas claim that nation-building is the topmost priority, then understand that nation is its people. No nation can develop if 85% population is living under the oppression of caste. But what is caste, and how it changes one’s life, one may ask! Well, Babasaheb has the answers; why don’t you begin reading him finally? A small disclaimer, Babasaheb will challenge you and your notions to the core. Either read him with an open mind or don’t read him at all. For me, I held his hand and asked him to show me the world, and he did! Happy Ambedkar Jayanti!